Red Light Dizziness and Red Light Pain. So Much In Common. So Much to Learn From One Another!

Red Light Dizziness and Green Light Dizziness
Red Light Pain and Green Light Pain
Well.  Here I go again.  I can't help but relate all of these concepts we are learning about pain to the dizzy world.  I love reading these articles and everyone's discussion board entries and listening to the lectures because they are helping me connect the dots from those battling dizziness with those battling pain.  For instance, after treating thousands of clients with dizziness for over 20 years, I have learned the following slide to be very true for so many of my patients.  A dizziness trigger can be any dizziness related problem (often BPPV, Migraine, or Neuritis/Labyrinthitis) or thought (sometimes the idea that one could fall or one could become dizzy) to trigger sensory reweighing.  Sensory reweighing is a complex nervous system process that turns sensory input from the vestibular system down (or up) and often leads to the vicious cycle of dizziness you see below: 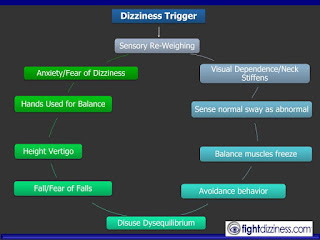 My role as a dizzy therapist is to get rid of the dizziness trigger as quickly as possible.  This might mean fixing the BPPV, promoting vestibular adaptation for neuritis, or teaching how to prevent Migraines.  These triggers often create intense spinning that require a special kind of treatment.  I call this type of spinning: "Red Light Dizziness."   When individuals have red light dizziness they need to stop, call me, do a maneuver, take a medication, etc.  However, once the red light dizziness is gone, they need to move normally.  This leads to how to break the vicious cycle of dizziness.  They need to adapt a "bring it on baby" mentality.  They welcome dizziness as an opportunity to improve and promote healing.  I call this stage "green light dizziness."  Green light means go.  The feeling that you could become dizzy is not a sign you will become dizzy.  I spend a lot of time educating individuals because it calms their nervous systems and promotes improved healing.
My point is that all of our readings and discussions have given me confidence that I can use a similar approach with my clients with pain.  I need to try to discover the cause of their pain.  I need to stabilize the cause and make sure it is not dangerous.  Once that is done, I need to help them grow and learn to break the vicious cycle they are likely battling through.  The complex nervous system involvement in the dizzy world sounds extremely similar to the world of pain.  Using words like "red light pain" and "green light pain" might help them learn to welcome certain types of pain as an opportunity to get stronger while other types of pain may indicate something needs to be adapted or changed.  I need to teach them that the feeling like they could have pain is not the same as having pain.

Posted by Andy Beltz at 7:19 PM No comments:

What Do the Vestibular Nerve and Pain Nerve Fiber's Have In Common?

In the peripheral vestibular system, Scarpa's Ganglion have a baseline firing rate of 100 spikes/second making the objective findings from a lesion possible.  Both Scarpa's Ganglion oppose one another (there is one on the right and left).  They play tug of war.  When one becomes irritated, it pulls harder than the other and when one becomes inhibited, it "let's go" of the rope.  This is the mechanism behind the fast and slow phases of nystagmus.

The question I have is do the ganglion in pain fibers have a baseline firing rate that would allow us to somehow find an objective signal that would allow us to "see" pain?
After a quick PubMed search, I found a quote by Krame's that has spiked my curiosity into this matter: "In the not-too-distant past, the dorsal root ganglion (DRG) was portrayed as a passive neural structure without involvement in the development or maintenance of chronic neuropathic pain (NP). The DRG was thought of as a structure that merely "supported" physiologic communication between the peripheral nervous system (PNS) and the central nervous system (CNS). Newer scientific information regarding the anatomic and physiologic changes that occur within the DRG as a result of environmental pressures has dispelled this concept and suggests that the DRG is an active participant in the development of NP. This new information, along with new clinical data showing that stimulation of the DRG reduces intensity of pain, suggests that the DRG can be a robust target for neuromodulation therapies."1

Perhaps a decrease in pain following stimulation to the dorsal root ganglion is as objective as we can get?

The following is an entry I wrote for my discussion board in tDPT school today. The idea of comparing these two worlds thrills me!

Hypofunctions and Hyperfunctions:  The Dizzy World’s Contribution to the Invisible World of Pain.
Since I am a dizzy therapist, I can’t help but love comparing this information with my specialty.  In Shmid’s article, the authors state,  “symptoms and signs in neuropathies can be classified as gain or loss of function. Gain of function, such as paraesthesia, spontaneous pain, hyperalgesia and allodynia, reflects abnormal excitability or reduced inhibition in the nervous system. Loss of function, such as hypoesthesia or anaesthesia, indicates reduced impulse conduction along the nervous system (Woolf, 2004).”1  Woolf et al elaborate by stating, “Peripheral neuropathic pain (Links to an external site.), that clinical pain syndrome associated with lesions to the peripheral nervous system (Links to an external site.), is characterized by positive and negative symptoms. Positive symptoms include spontaneous pain, paresthesia (Links to an external site.) and dysthesia, as well as a pain evoked by normally innocuous stimuli (allodynia) and an exaggerated or prolonged pain to noxious stimuli (hyperalgesia/hyperpathia). The negative symptoms essentially reflect loss of sensation due to axon/neuron loss, the positive symptoms reflect abnormal excitability of the nervous system.”2  In summary, Shmid’s terminology of “gain of function” can be compared to Woolf’s “positive symptoms” and “loss of function” can be compared to “negative symptoms.”  What is thrilling, is the comparison of this terminology with both subjective and objective findings in the world of dizziness.
Comparison of this terminology is remarkably accurate when related to the vestibular world.  More shocking, though, is the objective insight the dizzy world provides for the therapist trying to understand the impact of pain on our nervous system.   Indeed, what I have learned from the vestibular world is mind blowing when applied to the pain world and this terminology.
First, it is helpful to understand that peripheral vestibular problems can be organized into two major categories: Hypofunctions and Hyperfunctions.  Causes of vestibular hyopfunctions include, and are not limited to: Neuritis, Labyrinthitis, Chronic Meniere’s, Dysequilibrium of Aging, Ischemia, etc and vestibular hyperfunctions: BPPV and Acute Meniere’s.  It is interesting that dizzy subjective symptoms are very similar to the pain subjective symptoms in hypo and hyperfunctions.  For instance, a few of the sensory problems caused by vestibular hypofunctions include: delay, off, things have to catch up, and off balance.  In addition, sensory problems caused by hyperfunctions include: intense spinning, nausea, vomiting, and astounding fear/avoidance.  Both categories of vestibular problems compare nicely with the “negative” and “positive” symptoms described by Woolf et al.2
More astounding, though, is the fact that the dizzy objective findings can be seen and correlated with the subjective symptoms.   Vestibular hyopfunctions and vestibular hyperfunctions cause obvious objective signs that, when compared to the pain world, might give health care providers treating pain insight into an invisible world.  When a client has a hypofunction they will have nystagmus that beats away from the side of the lesion.  When a client has a hyperfunction, they will have nystagmus that beats toward the side of the lesion.  The nystagmus is often symptomatic and, in the case of BPPV, one can often tell the client what they are feeling without them having to say anything.
These objective findings in the vestibular world help provide credibility and proof that categorizing peripheral nerve injuries as gain of function and loss of function can be compared to hyperfunction and hypofunction in the vestibular world.  The objective findings in the dizzy world can provide confirmation of the reality of the science of symptoms relating to pain.
References
Posted by Andy Beltz at 10:14 AM No comments:

Check Out Andy's Course Reviews By Clicking Below: